Ear candling or ear coning, was first discovered in Ancient Greece.  The Greeks used pottery clay to make cone-shaped instruments that were placed in the ear, into which the wax was poured. The cones were carved on the inside with a double helix, creating swirling channels on the inner edge of the clay cone. Once the candle was lit the carved channels helped to draw warm air and smoke down into the ear canal.

Different herbs were burned during the process, helping to cleanse and draw out impurities from the ear, such as lavender, chamomile, sage, or St. John’s wart. 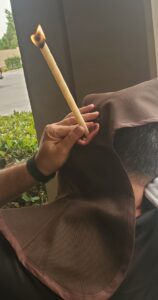 From Ancient Greece, the practice of Ear Candling spread to other civilizations. In Ancient Egypt, the principal cloth used for Ear Coning was linen or flax.

The service will be held outside and will take approximately 30 minutes.  Ear candling can be scheduled with a massage session or as a stand-alone service.